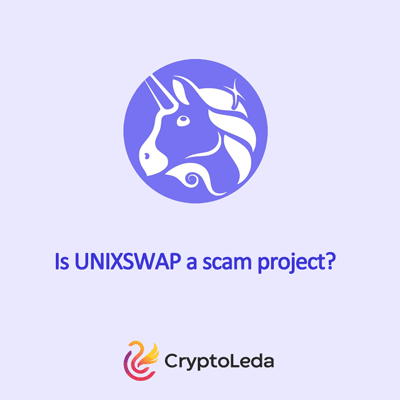 A new project called unixswap.io has launched its Airdrop and IDO, Its symbol is UNIX and which after research, turned out to be a scam.

They claim that UNIX is a hard fork of UNI, which aims to eliminate the inherent flaws of UNI, simplify the user threshold, and provide lower rates to improve the DEFI ecosystem.
UNIX has a total supply of 500,000, which is only 1/2,000 of UNI. It is intended to create high-priced coins to attract popularity!
There are good reasons why UNIX is a scam that we are announcing.

Note: UNIX has used the name of the famous UniSwap exchange project to mislead users, be careful not to confuse it.

UNIX has a fake WhitePaper

Currently, the second version of WhitePaper has been placed on their site. The first version was removed because we announced it was fake, and then they put the current version.
In the current version of White Paper, they do not provide a complete explanation of the UNIX project, and it is clear that they are completely trying to deceive users.
They have released WhitePaper twice for the UNIX project, do not you think it is suspicious and fraudulent?

UNIX claims to be listed in big and famous exchanges

UNIX claims that it will be listed in Binance, Coinbase, Huobi, Hotbit and Other Mainstream Exchanges, but research has shown that these exchanges have no plans to list UNIX.
They claim that large exchanges will list after the pre-sale is over, but they have not yet been listed on Coinmarketgap or Coingecko, and the exchanges have not issued any announcements for listing UNIX.
This is a false claim to deceive IDO and Airdrop users and participants. Other projects have used the same method and trick for scams before and it is an old method.

Use the Ethereum network to deposit UNIX Airdrop to participants

As you know, the transfer fee in Ethereum Blockchain is high. If UNIX uses this network to pay Airdrop rewards to participants, it will have to pay a high transaction fee for each participant.
They have more than 65,000 users participating in Airdrop. If we consider the Ethereum network fee of $20, they have to pay more than $1,300,000 fee for Airdrop deposit.
Doesn’t paying this high fee cause them to go bankrupt?
Please be reasonable, no project uses this network to deposit rewards for thousands of participants!

We have already introduced other Scam projects that are similar to UNIX. For example, DXDY Scam Project, UNIY Scam Project, NFTSEA Scam Project, DNFT Scam Project, etc.
All of these projects are likely to be created by a specific group and disappear after the scam.
Please be careful and let us know if you encounter such a project.

If you have a comment about the UNIX project, let us know. We are happy to know if you think UNIX is a scam or not ?!
Be with Cryptoleda 💚

Terkehh (TERK) and Musk Metaverse (METAMUSK), both are new tokens.
They are listed on the coinmarketcap and are trading. But their future is uncertain.

Please help research on EUSD, If it’s a scam. Thanks

Hi cryptoleda team, Happy to join you. I have a request. Please post a analysis of the Minereum BSC token too. Many people got this Token in their wallet automatically including me. I am not able to identify whether fake or not.
Thanks!

Hi Chinmay,
I have been researching the Minereum BSC project for some time, but have not yet reached a conclusion.
I just recommend that you do not invest in it.