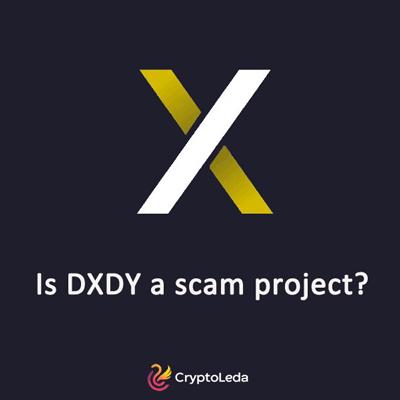 Is DXDY a scam project?

A new project called DXDY.Finance has launched its Airdrop and IDO, which after research, turned out to be a scam.
There are good reasons why DXDY is a scam that we are announcing.

Note: dxdy has used the name of the famous DYDX exchange project to mislead users, be careful not to confuse it.

According to the PeckShield team on the official Twitter account, the audit report provided by DXDY.Finance is fake and has no real value.

We notice that a project named so-called DXDYFinance claims audited by PeckShield, which is not true. The audit report posted on their website is forged from our earlier audit on the innovative

#ScamAlert We notice that a project named so-called @DXDYFinance claims audited by PeckShield, which is not true. The audit report posted on their website is forged from our earlier audit on the innovative @dydxprotocol @dydxfoundation pic.twitter.com/a6Az9wvA4z

DXDY claims to be listed in big and famous exchanges

DXDY.Finance claims that it will be listed in Binance, Coinbase and Hotbit exchanges, but research has shown that these exchanges have no plans to list DXDY.
This is a false claim to deceive IDO and Airdrop users and participants. Other projects have used the same method and trick for scams before and it is an old method.

Use the Ethereum network to deposit Dxdy Airdrop to participants

We have warned many times about the scam of this project, but still more than 100,000 users have participated in AirDrop and its pre-sale.
Take care of your capital.
They are depositing dxdy tokens for some users, but this is only to gain users ‘trust, and they will do more pre-sales after increasing users’ trust in themselves, and then drop everything and disappear.
They have done exactly the same thing before …

New update: They changed their site address from DXDY.Finance to DXDY.NETWORK.
The reason for this was stated to be technical problems, but the reason for this change is the introduction of DXDY scam.
We have repeatedly announced on social media that DXDY.Finance is a scam and we have informed many users.
Now, in order to remain anonymous, they changed their site address to DXDY.NETWORK in order to deceive new users.
New users are not aware of the old address and are easily deceived.

If you have a comment about the DXDY project, let us know. We are happy to know if you think DXDY is a scam or not ?!
Be with Cryptoleda 💚

Wow! I’m really proud of crytoleda and the coteam behind it’s research, when I was introduced here to detect real from fake project token, I tot I was on another fake but hey ! You savin life now….I wouldn’t lost to bitcny airdrop scam and Bitles if suppose I knew here already hmmm!

Hello Dotmani,
So thanks.
Always research or ask us before investing.

Thanks for this reasonable research . I would have known about minereum bsc, is it a scam alert?

i wonder where binance, coinbase and hotbit are from?

Thanks god mercy me, I & my brother will pay about $50,000 to buy ETH and invest with this project…

if the project is a scam, these people are driving themself into the hell… soonest

Unfortunately, the DXDY project is a scam.
Always do some research before investing.

Lets wait till the final date they gave before coming to conclusion, Don’t come and set people bp high

Honestly I didn’t spend a cent and have noticed ways to get under the skin of the admins on the chat pages. At first I was being semi sincere just telling ppl to check the transactions regularly on etherscan along with the amounts deposited, ask ppl claiming to have received to publish their wallet address to cross match and all of a sudden I got messages privately if IO needed special help, move me up the line etc. Next step is to figure out how to get even a cent out of them, or just waste some of their time to minimise the speed and scale of their swindle.

which benefit they catch from this scaming ?

Oh shit, I thought this token was valuable