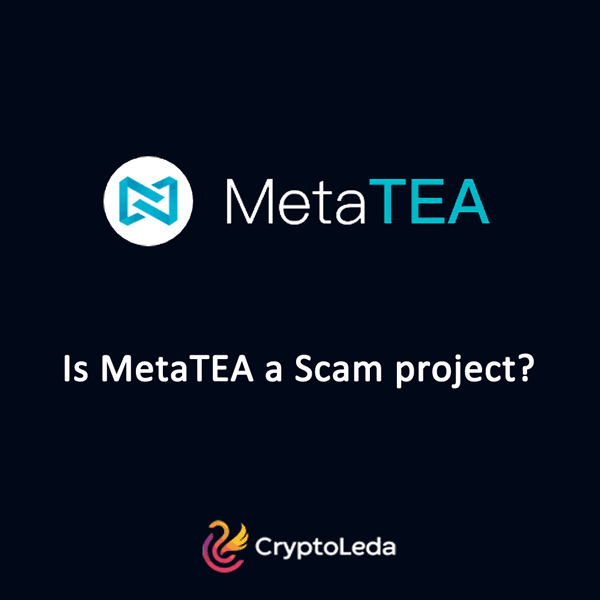 At the request of our users, we decided to check the MetaTEA (Symbol: MTEA) project for legality or not.
According to our research, MetaTEA is a scam and we have good reasons for this claim.
In our last review, we reviewed a project similar to FoxMask, which was also a scam.
These two projects, along with other projects introduced in the Scam Alerts section, have the same structure and path.
Join Cryptoleda as we explain our reasons in full.

Why does MetaTEA not have a white paper?

As we have repeatedly stated in the FoxMask or DXDY project that they use the same fake white paper, we also expected a fake white paper from MetaTEA but they did not release any white paper.
We guess it’s because we’ve grabbed their wrists many times and they haven’t been able to come up with a new white paper in such a short time.
Note: Be careful, all valid and powerful projects have proprietary and approved white paper.

Is MetaTEA listed on Binance and FTX?

As always, this is a false claim to deceive users that MetaTEA will be listed in these exchanges in January 2022.
We have reviewed and none of the Binance and FTX exchanges have issued a notice about MetaTEA listing.
They know that Binance and FTX are big and reputable exchanges and only list valid tokens, so by falsely claiming, they are trying to gain the trust of users.
Whenever you see a claim about a token being listed in an exchange, be sure to check the announcements issued by the exchange.

Why does MetaTEA use the Ethereum network?

In this article, we examined the legality or otherwise of the MetaTEA.one project and provided sufficient reasons for its invalidity.
It is safe to say that MetaTEA is a scam and any user who invests in it will fail and lose their money.
Beware of scammers.

If you know of a project like MetaTEA that might be a scam, send it to us for review.
Be with Cryptoleda 💚

Thank you for your help, these scammers are very out to defraud masses.

Thanks for the research.