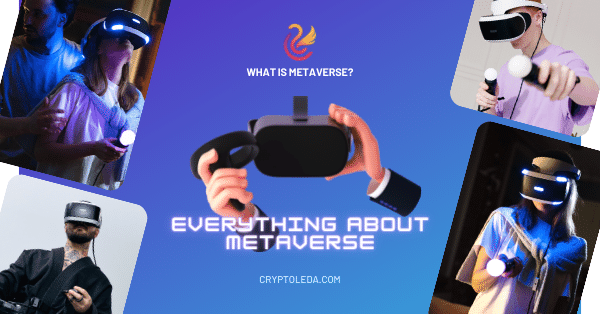 These days, everyone is talking about Metaverse, but what is Metaverse? What has that got to do with the blockchain world? Many well-known companies in the world of technology are new and want to invest in it, today we have prepared an article for you in Cryptoleda so that you can become more familiar with this technology.

Facebook is planning to rebrand itself with a new name to focus on the metaverse, South Korean millennials and gen Z are also gathering in virtual alternative worlds.

The term metaverse is fast becoming a buzzword in tech and business but do you know what it means?

So the word metaverse is quite a broad term but generally it refers to online spaces that allow people to interact in a more immersive way than a traditional website, this could be through the use of virtual reality so wearing a VR headset but people also use the term metaverse to refer to virtual environments where you have an avatar a little cartoon person representing yourself and you can walk around and interact with other people’s avatars like in a video game.

Fans of the metaverse see it as the next stage in the development of the internet your different monitors ceo mark zuckerberg said in july that facebook will transition from being a social media company to a metaverse company in the next five years. they’ve already invested heavily in developing virtual and augmented reality headsets and glasses and will reportedly create 10,000 jobs in the european union to bring their metaverse plans to life.

And facebook is certainly not alone other investors and companies are getting excited about being a part of the next big thing the term metaverse is popular in silicon valley with microsoft also talking about converging the digital and physical worlds.

Because of the global health crisis over the past 18 months more people have been working from home and going to school remotely spending a lot more time online and missing out on human interaction at the moment we connect with people who aren’t physically near us by going to websites such as social media platforms or using messaging apps and video calls but now some people think there’s more demand for online spaces where people’s interactions can be more multi-dimensional and life-like allowing people to immerse themselves in digital content rather than simply viewing it.

What does blockchain have to do with Metaverse?

There is also a specific type of metaverse which uses blockchain technology the same technology that’s behind bitcoin. One of such blockchain based virtual worlds is decentraland, in there users can buy digital assets such as clothes and even land using cryptocurrencies. Fashion companies are noticing the trend experimenting with making virtual clothing which people’s avatars can wear in metaverse environments.

While the metaverse offers a new space for people to socialize trade game and even attend music concerts right now it’s still no comparison to the real world.

Some of projects that are working on metaverse

Among the projects that work in the field of Metaverse, we can mention the SAND, MANA, GALA, SHILL and ATLAS project, the tokens of which have recently become very famous and trendy in the world of cryptocurrency.

We will prepare more articles in this field for you and will review each of these projects. Stay tuned to Cryptoleda.

How to use stop loss on Coinex

Hello EGUN,
so thanks ❤️🌺